This month, I talk to Juana Adcock, poet and translator working in English and Spanish, nominated by Robin Myers. 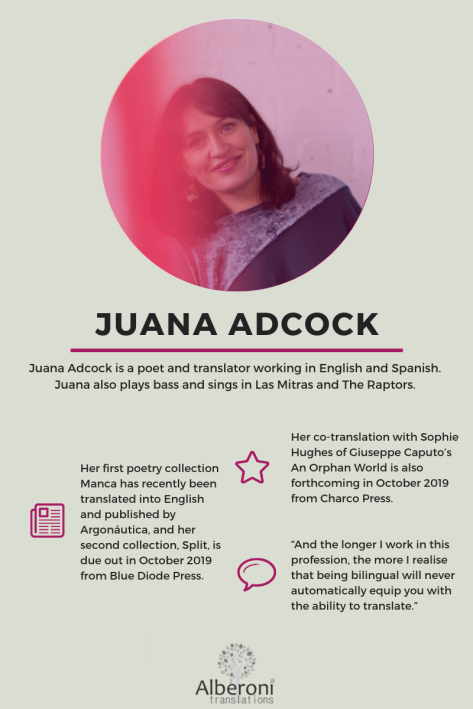 1. You were brought up bilingual (to an English father and a Mexican mother, having spent the first part of your childhood in England and the rest, till the age 25, in Mexico). To which extent do you think this has influenced you into being a translator? Has it helped somehow?

Absolutely. My entire life experience has been marked by an obsession with language and the written world, and very real, embodied experiences of linguistic and cultural translation. My dad is a translator too, and runs a commercial translation agency. He gave me my first job after I graduated from university, and growing up, the conversations at the dinner table more often than not revolved around translation problems. My whole life has been like one never-ending Translation Summer School (for those who have attended such things, you’ll know that’s pretty intense!). I don’t know if any of this has helped me as a person, as it has made me a bit too aware of language, in a way that can be pretty dysfunctional when it comes to off-the-page interpersonal communication (as most of my friends and family will attest!). But it definitely gave me a career path which I love dearly and am deeply grateful for. And the longer I work in this profession, the more I realise that being bilingual will never automatically equip you with the ability to translate. So many more skills and tools are needed than that, and the learning process is infinite. Each new translation project teaches me a lot, and that’s precisely the fun of it.

2. Having been based in Glasgow since 2007, you say you have a fascination with the Scots language(s). It’s interesting that you say that, because I’ve just arrived from a vacation in Europe, when I visited Edinburgh for the first time and was genuinely impressed and fascinated by their English, so I would love to hear what you have to say about it. Can you give us examples of what fascinates you most in the Scots language(s)?

I love the immense variation in accents – a phenomenon that you get throughout the UK but which seems even more marked in Scotland, where words seem closer to their roots and down in the ground instead of coming out of your mouth like rings of smoke and floating above your head the way they do in things like RP. Leaving Gaelic aside (which is a whole other thing I haven’t explored very much yet) in Scotland you have the Doric of the northeast coast, the Dundonian, the sing-songy accent of Fife, and even within Glasgow you get a huge array of different accents: Southside versus the east end Dennistoun versus East Kilbride. Many of these variations intersect with the old trade routes and family histories of migration, as well as social class. Then you have the historic Scots – what Robert Burns wrote in – and modern literary Scots, which may or may not be a mashup of Scots from different regions. The vocabulary comes from Germanic, Old French and Dutch, but the grammar is also different, as is the pace, intonation and pronunciation. Literary Scots also often has to reinvent its own spelling each time it is written, as a way to represent on the page the way people speak. I adore not always being fully able to understand what people are saying and instead just bathing in the music people make with their mouths; just giving in and letting it wash over me like it’s pure poetry. My earliest encounters with Scottish accents were through the film Trainspotting and Mogwai’s first album, Young Team, where one of the songs includes a telephone conversation which I couldn’t understand a word of, despite being a native speaker of what was purportedly the same language. Here’s a few lines of my favourite poem by Alexander Hutchison, who wrote in Doric as well as English (you can read the whole poem here):

fit’s it gaan tae be?

aa the wee glisterin anes; aa them that wid grudge ye one jow o the bell.

As you can imagine, carrying all this into Spanish was no easy feat. My approach was to use a combination of modern northeastern Mexican slang and archaic words and to be as musical as possible to try and replicate what the poem is doing. I don’t know how successful I was, but I definitely want to work with Scots.

I recently wrote a long love poem to the Scots language. As is my habit, the poem moves between different languages, in this case English, Scots, Spanish and Italian. Whilst performing it I become hyper aware of where the words sit in my body: I was already well familiar with the way Spanish booms in my chest while English thins out above my head, but I was amazed by how the Scots goes back down to my chest. I probably need to write a whole other poem about that, too.

3. You have worked in a couple of co-translations (An Orphan World, by Giuseppe Caputo, with Sophie Hughes; Sexographies, by Gabriela Wiener, with Lucy Greaves). How is the experience of co-translating different from translating a book entirely by yourself?

It’s basically a lot less lonely, and a lot more fun. It’s being able to engage in a three way collaboration: not just with the author who may or may not want to be very involved in the process personally, but with someone who understands the mechanisms of both languages and every single one of the minute problems you are trying to resolve. You get to make a lot of insider jokes that only you and your co-translator will ever understand. And, personally, I grow to love the work a lot more through the love that emerges in the collaborative process. Even though I’m a writer, I sometimes don’t work particularly well in isolation. I can get bogged down in the details, or stuck for days trying to come up with a solution to something that my co-translator doesn’t even see as a problem: to them the answer is obvious. Then of course comes a whole other conversation, and I think the translation becomes richer because of it. Each translation is a different reading, and a co-translation is merging two different readings into one. It is a wonderful luxury and a very rare one in the world of books: as readers, during the act of reading, we are always alone with the text. We may be able to talk about our reading experience with a fellow reader after the fact, but we really get to do with another person the kind of close reading that translation is. If I could, I would only ever do co-translation for the rest of my days.

4. Besides being a translator, you are a poet and musician, playing in two all-female bands (including writing some of the songs in one of them). Talk about talent in arts! Do they combine somehow and add to each other or help in one another?

Music helps me immensely. It both grounds me and lifts my spirits, and when I’ve been playing music my writing and translating feel freer, more relaxed and spontaneous. The voice I’m looking for takes less time to appear: I can hear it more clearly in my head, and all I have to do is transcribe. I did try and quit music for good at some point: it was the worst mistake of my life. I’ve never been so depressed or creatively blocked. I’ve now promised myself to always play music, even if just to myself in my bedroom, because it makes me a better writer and a better translator.

5. Last November, you presented at the Glasgow Feminist Arts Festival at an event called So It Is Better To Speak, which explored “the fluidity and complexity of women-identifying and non-binary identities through sound, voice and the body,” and emphasized “the importance of shared knowledges and experiences that emerge when we speak up and out.” Sounds really interesting! Could you tell us a bit more about how it was and what exactly you did?

That was one of the best events I’ve ever had the honour to take part in. The festival was organised and curated by the brilliant film critic and scholar Becca Harrison, and the event included a balancing act from composer Amble Skuse, Scottish folk song with a feminist twist from Burd Ellen, contemporary flute from Diljeet Bhachu; storytelling from Mara Menzies; and a queer sermon by performance maker Nelly Kelly. The performances were followed by a roundtable discussion hosted by Dee Heddon of the University of Glasgow. It’s not often that you get to see music, performance, poetry and storytelling in a single event which also has an intersectional feminist focus. It was a true luxury to see everyone’s work alongside each other and then have the time to talk about our creative processes and how feminism informs our practice, exploring questions we don’t often get to ask ourselves and each other. It surprised me that we all seemed to be working with the archive in one way or anthoer, drawing from it but also resisiting it in different ways, re-inventing or fictionalising it as a way to subvert the heteropatriarchal discourse. And I learned a lot from hearing all of these insanely talented artists talk about their work, as they helped me understand my own practice from a different angle, and even gave me new ideas for how to tackle work in progress that I’d been struggling with. The event was packed out at the CCA in Glasgow, with the only man in the audience being Becca’s boyfriend! But that was somehow even better. I cannot wait for the festival’s next edition, and if I didn’t live in Glasgow I would travel just to come to it. It is as unique and richly informative as it is urgent in our current times. Definitely keep your eyes peeled for it and come to it if you can.

6. Now it’s your turn to nominate our next Great Woman in Translation.

I’d like to nominate my beloved co-translator, Sophie Hughes.