Welcome back to our Greatest Women in Translation series!

This month, after a one-month break (my bad), we return with the series with Jody Gladding, nominated by Linda Coverdale. 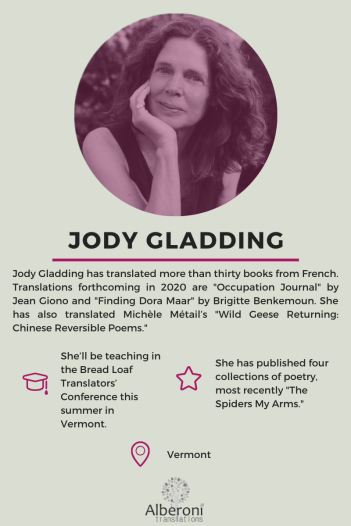 1. What came first, the poet or the translator? How?

Poetry came first. Translation followed as a way to earn my living. But its real appeal is that it lets me work with language in the same close way—and I don’t have to come up with content.

2. You wrote Translations from Bark Beetle (Milkweed Editions, 2014), a book of poems that, according to this paper, helps “students get the profundity of the Latin of translate, which points toward a carrying across.” Could you tell us more about the book?

The title comes from a series of poems that are, literally, translations of bark beetle engravings, with the original “text” as the facing page. I include notes on bark beetle grammar and invent a new pronoun form. I’m playing, of course—for me, play often precedes discovery. If insect marks can be a text, then the realm of linguistic beings expands enormously. Imagine the possibilities for translators!

3. Besides being a poet and translator you are also an artist. Do you combine poetry and translation into your works of art? If so, how?

The art I make extends from the poetry, and translation plays a part as well. My latest project, for instance, is a collection of nests in which text—strips of it cut from a nineteenth-century French phrase book—is included as one more nesting material (http://www.jodygladding.org/nests). I’m interested in how poems operate as physical acts, in three-dimensional space, in the world at large. Artists like Cecilia Vicuña, Ann Hamilton, and Roni Horn also explore these questions, although they’ve come to them through visual art and I’ve gotten there through writing.

4. You translated two meditation-related books by François Cheng. Did your experience translating the books inspire you to start meditating? I ask as someone who has tried meditation a couple of times but hasn’t given up just yet.

Keep trying! François Cheng is a remarkable figure. He’s written extensively on Chinese art and poetry as well as being something of a zen master.  I’m married to a Chinese translator, David Hinton, so I was already familiar with Cheng’s work when I translated his meditions on beauty and on death. I’ve meditated from time to time, but don’t have a regular practice, though I do practice yoga.

I’ve translated three authors who are also translators, all of whom translate Chinese: François Cheng, François Julien, and Michèle Métail. I’ve also translated a French translation of The Tao Te Ching into English. In all these cases, the main difference about the experience was dealing with three languages, not just two. Though in the company of Chinese, French and English hardly seem like different languages.

6. Are there any particularities in translating French into English that you like and/or dislike?

Well, as Linda Coverdale points out in your last blog, the on is a great and versatile French pronoun that we don’t have a good equivalent for in English. And going the opposite way, a particularity that keeps striking me, especially this winter as I’m spending it in France, is that there’s no word in French for home.

Thanks for this opportunity to bring women translators into the limelight. I’d like to nominate Michèle Métail, a wonderful French poet who translates from both German and Chinese. She has translated into French the remarkable “reversible poem” by the 4th century woman poet Su Hui. A grid of 840 characters (originally embroidered on silk as a gift to her husband), it can be read as many as 12,000 different ways.