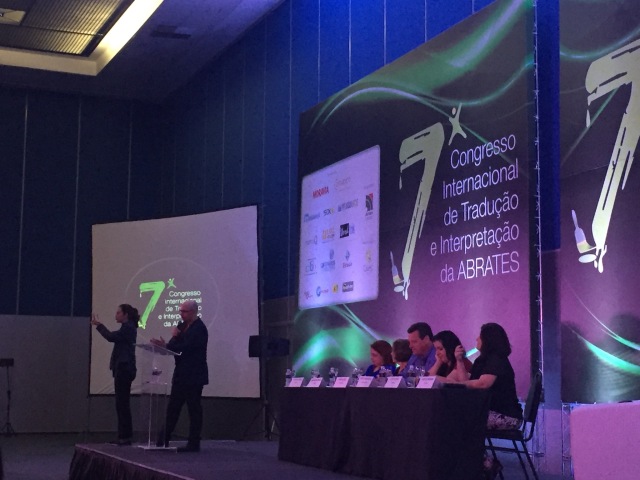 The 7th International Abrates Conference was held from June 3 to 5, in Rio de Janeiro, Brazil, our Wonderful City – that truly lives up to its nickname. It was an amazing event, way better than expected, in my opinion, even though there were less attendees than last year, probably due to our unfortunate financial crisis. However, those who attended the event were certainly not afraid of the threat and took the bull by the horns leaving their comfort zones, dusting off, polishing their knowledge, networking and prospecting.

The conference in numbers

This year, the Brazilian Association of Translators and Interpreters (Abrates) also offered pre-conference courses in association with Café com Tradução on Thursday and Friday. On Thursday, Val Ivonica gave a basic course on memoQ. On Friday, Roger Chadel gave a basic course on Wordfast Classic; Val Ivonica gave a workshop on Regex (advanced memoQ); Carolina Caires Coelho and Flávia Souto Maior, from Ponte de Letras, gave a workshop on translation of literary texts from English into Portuguese; Cláudia Mello Belhassof gave a course on Brazilian Portuguese grammar; Daniele Fonseca, on interpreting and how to make decisions in real time in the booth; Ana Iaria and Ricardo Souza, on shipping and similar documents and their translation solutions; and Rayani Immediato and Mabel Cezar, on translation for dubbing and relationship with clients. They could be purchased separately, but with a discount for conference attendants.

Also on Friday, in the afternoon, there was also the Abrates accreditation test.

Social events started on Thursday with a happy hour organized by yours truly and Abrates Board members Dayse Boechat, First Treasurer, and William Cassemiro, Second Treasurer and recently elected President, at Inverso Bar. It was a nice opportunity to say “hi” and get to finally meet some colleagues in person, talk and relax a bit. Approximately 70 people managed to meet us there, so it was really pleasant and fun.

On Friday, after the opening the ceremony, there was a toast with a buffet offered by GALA (Globalization and Localization Association). Another good opportunity to see those who arrived only on Friday.

On Saturday, there was a dinner organized by Abrates with good food, drinks, music, dancing and lots of fun. I certainly had a great time and laughed a lot.

Last but not least, on Sunday, last day of conference, Fabiano Cid organized a GALA networking get-together at Pub Escondido. Once again, we had such a great time and could relax from the hectic conference days.

The conference’s official opening was on Friday evening. Before the actual opening interview, William asked if there was any sign interpreter who could volunteer to interpret the opening. Paloma Bueno Fernandes kindly volunteered and did a wonderful job interpreting the national anthem. Everybody turned their eyes to her and her amazing interpretation, beautifully followed by someone who was standing right in front of her. It was an unforgettable moment.

Renato Beninatto then interviewed Cora Rónai. Cora is a journalist and daughter of Paulo Rónai, who was one of Abrates’ founder and also hold the position of President of the association. Paulo was born in Hungary, but moved to Brazil during the war. Besides being a translator, he was also a philologist and critic. Although Cora is not a translator herself, it was beautiful listening to her telling stories about her father, his many important friends, such as Aurélio Buarque de Holanda, with whom he exchanged lessons of Portuguese and French. Her father, as she said, was saved by translation. He was released from prison for being the only person who could translate from Hungarian into Portuguese. Some curious facts about Paulo were that he loved footnotes to explain translations and was one of the first people to have an electric typewriter. I had already heard Liane Lazoski (Abrates’ President) talk about him that same day in such a beautiful way and with such passion and admiration that inspired me to want to re-read his books.

The first day of presentations started brilliantly with Kirti Vashee’s presentation, who talked about Corporate Utility and the General MT Technology Landscape. Kirti is a US-based independent MT consultant/expert and presented some quite interesting insights and figures on MT, for example, he said Microsoft spends US$ 500 million a year on human translation, but that accounts for only 2% of what they translate. Other companies that use MT in their translations are: Facebook, eBay, Google, Intel and Adobe. Some translation volumes are too high and cannot be met by human translators, so that’s when MT comes into play. “Good MT” allows more to be translated faster and at a lower cost. However, if there is legal viability and real importance, human translation must be used in order to avoid risks. Kirti said that in languages like Portuguese, Spanish and French, MT is getting better with time and can be a threat in case of repetitive material (Hungarian, Turkish, Korean, Hindi, Zulu and Swahili are, on the other hand, among the worst). According to a Google study (2012), Portuguese is the best MT language due to its greater and larger content. 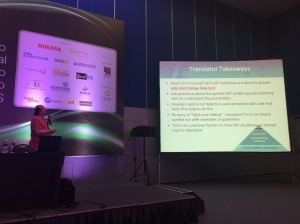 Our current scenario demands faster turnaround times, resulting in more information, therefore, in the need for faster translations. An interesting fact Vashee pointed out was that today we have more active scientists alive than in the previous 200 years all together. It is a lot of information being produced!

What needs to be clear is that MT engines are not equal. Some are great, others are terrible. And the problem is most DIY initiatives are created by people who do not know what they are doing. We, translators, should take part and get more involved so we can change this scenario to our benefit. Human feedback can raise the raw output to previous unseen quality levels. It is worth knowing how to climb. Understanding MT output is key to determining opportunity value. Quality of the MT system can be even more important than rate per word. The best translators develop their own “effort scores” after seeing a meaningful sample of actual MT output.

Kirti Vashee suggests Lilt, an adaptive dynamically learning MT environment that personalizes its suggestions to the translators’ translation style. Although it does not support all languages yet, it does support Brazilian Portuguese.

In a nutshell, PEMT will become more common, so we have to learn to determine when it makes sense for us.

Read the impressions and reviews (most of them in Portuguese, but there are a couple in English at the end) of other attendees: