Last weekend, from June 5th through 7th I attended (and presented at) the VI Abrates International Conference in São Paulo (Centro de Convenções Rebouças). Abrates is the Brazilian association of professional translators and interpreters and, since 2013, they hold an annual conference in different Brazilian cities. The event is the largest and most important in the area in Brazil, and possibly now the largest in Latin America. This year, we almost reached 900 participants (last year, in Rio de Janeiro, there were 450 attendees; and in 2013, in Belo Horizonte, 390).

The conference officially started with great news: PayPal partnered with Abrates and will now offer special rates for receiving payments – for Abrates members only. For receiving payments from abroad, the rate will decrease from around 7.4% to 3.49% + R$ 0.60 per transaction. Everybody – including me, of course – was ecstatic with the fantastic news! Stay tuned on how to benefit with it if you are an Abrates member. The association will publish it on their site and share on their Facebook page when they do. Besides, you can also call PayPal’s SAC to know more. Following the official opening, the first keynote speaker, Robert Lane Greene, Berlin-based business correspondent for The Economist who writes the “Johnson” column on language for The Economist online, talked about languages around the world. He starts speaking in an impressive Portuguese and admits he is part of a small group of weird North-Americans who like to learn other languages. After his introduction, he starts his presentation in English and shows us some interesting numbers related to languages on the internet. On Wikipedia, for example, translations are mainly to and from English, indicating a lack of language connections. On Twitter, a great number of users tweet in two languages, and Portuguese/English is one of the most common pairs (behind Malay and Spanish). Greene also differentiates between business suit language and underwear language: the first is the one you simply wear/use for any reason, the second is close to our heart and intimate self.

The infographic on this page was one of the images he showed. Robert also mentioned this article. He also has a book, You Are What You Speak. 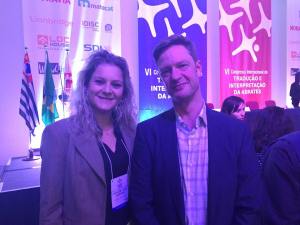 After his interesting presentation, we had a cocktail party where we had to change to say hi to our fellow translators.

The actual presentations started for good the next day. The main characteristic of this conference is that we have plenty of choices to choose from: there were six different rooms with a diversity of topics being presented at the same time throughout the event. My first choice (always a difficult one, Paula Ianelli and Reginaldo Francisco, for example, were also presenting at the same time) was about technology and how we can use them to improve productivity, by Fernanda Rocha. Did you know, for example, that Windows and Mac’s calculators convert units and currencies? They also calculate periods of time. You can also add two other clocks (time zones) to your toolbar.

Time to change rooms! Off to room 5 where Rafa Lombardino talked about digital self-publication. Did you know that, in Brazil, a material becomes public domain after 70 years of the author’s death? She suggests creating a blog/site to document your book translation projects (it can also serve as a portfolio). You can find the newsletter about her presentation and the link to the Prezi presentation here.

Next one was in room 1, with João Vicente de Paulo Jr. and Giovana Boselli, who mentioned some important steps we have to follow when/before accepting a project not to have unexpected problems down the line. For example, read the allocation instructions carefully (delivery date/time, volume, subject), open the files and have a look at them, check if a big project requires partial deliveries, check if there is reference material to be followed (glossaries, style guides), payment method.

After the coffee break, I heard Monica Hruby, president of ATPI-Rio, mentioned some problems sworn translators face in Brazil and the regulation that surrounds it. An important point: translation agencies can’t be sworn translators! So be aware! I chose this presentation because I heard from a colleague last week that many sworn translators on Jucesp’s list are dead and their son/daughter are translating on behalf of the deceased translator! This is totally insane!

Back to room 1 to hear Raquel Lucas de Souza tell us about how she became an agency. Circumstances made her realize she could solve her clients’ problems not by translating, but by finding people who could do it, being a project manager. We need to fully understand ourselves in order to identify our qualities and find out our place in the market. A professional posture is essential for having good final results. At the same time, Capitain Israel Souza Junior, last year’s keynote speaker, was talking in room 4 about idiomatic expressions in war movies’ translation.

After lunch, I watched a panel with representatives of 10 associations: ATPIESP, ATP-MG, APIC, GALA, ATP-Rio, ASTRAJUR-RS, ATPP, Abrates, Sintra and ATA. The panel was very informative and useful, but I’d like to bring the attention here to the current situation of Sintra (Brazilian translators’ union). It once had only 173 paying affiliates and considered closing its doors. Nowadays, there are 233, but it is necessary 327 in order to have a financial balance. With its current budget, they can only run until October. Currently, 106 affiliates are in default, but they can only be removed from the union after 2 years not paying! The annual fee to become an affiliate is R$ 330.00. As pointed out during the panel, some people spend a fortune to attend ATA’s conference, but claim it’s too expensive to pay for the union’s fee. I’m an affiliate and I believe the union is essential for helping us defend our rights. See, for example, what they are doing, with ATP-Rio and Conati, to defend our rights regarding Simples Nacional here.

Conference attendees featuring yours truly doing what I did best: tweet. 🙂

Please find the second part of this post here.

Leave a Reply to Carol's Adventures in Translation Cancel reply