Welcome back to our interview series! It is a great pleasure to start another year here on the blog and to welcome you all. May we all have great adventures together in 2017. 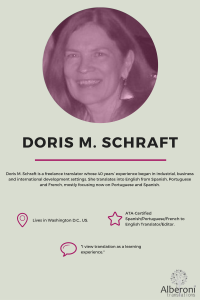 1. How were you introduced to the world of translation and how did you start working as a translator?

I would have to say that translation actually began for me at the beginning of my language-learning experience, with Spanish in high school. The traditional grammar/translation method of instruction was used, which meant that the greatest emphasis was placed on learning Spanish grammar and writing correct sentences in that language. It built a textbook-oriented, highly visual connection with the language, with little emphasis on conversation skills. I connected very well with this method, because I had spent several years in primary school being taught English grammar and diagramming sentences. As a result, I was already well-versed in the analysis of language mechanics. When I started my university Spanish studies, I came to regard this visual language-learning method as unfortunate, as it was assumed that mid-level language students already knew how to converse in their second language!

When I added French to my language repertoire as an undergraduate student at university, the teaching method was quite the opposite. Although we had textbooks, class time was spent developing oral skills without reliance on visual aids, and grammar received secondary emphasis. But as a Master’s student, I returned to analytics, concentrating on Spanish linguistics. That focus solidified the foundation for my later work as a translator. As a PhD student, I delved into Portuguese as part of a program in Latin American studies. The instruction method there was more of a blend, and the learning came easier. Of course, it didn’t hurt that my three foreign languages were all descended from Latin roots, and just to tie things all together, I studied Latin as well. The bonus was that it opened my eyes to just how many words came to English through that classic language. Even though English is classified as a Germanic language, more than half of our words had their origin in Latin.

Ultimately, I was unable to deny my apparent calling in language analytics. In fact, I seemed to be fated to begin my professional career as a translator. My first job essentially fell into my lap when I moved to Washington, DC, when a friend alerted me to an opening for a Spanish translator in her employer’s industrial firm that made simulators for power plants, submarines and airplanes. I decided to interview with them, despite misgivings that, given my background, I was unqualified to work with such subject matter. They offered great encouragement, however, explaining that I would be able to consult with previously translated materials, consult with the engineers, and tour the simulators as needed. It was a leap of faith, but I took the position, and my two years there were a fascinating and educational experience.

2. In between your early experience as a translator (let’s face it, what is 2 years compared to 40, right?), you worked as an Administrative Manager at a development resources company. Why did you decide to have this change of ground?

When my company’s contract with the Spanish government ended and they failed to win another expected contract, I looked for another translation position in a tight job market. Although my next position — with a consulting firm that undertook socioeconomic development projects in less-developed countries — was not that of a translator per se, I did do some translation for them along with my larger administrative duties. We sent teams of agricultural engineers, agronomists, economists, and environmental consultants to countries around the world that could benefit from their expertise, funded by various international organizations. It was here that I became familiarized with those organizations’ mission of sharing knowledge and resources across borders, and met many professionals who shared that commitment and wanted to use their skills for the greater good of others. My later freelance work greatly benefited from this experience.

With a continuing desire to work more closely with languages, I decided to pursue that avenue after three years of working mostly as an administrator. Berlitz offered me a broad range of experience over the three years I worked there as a staff translator, able to draw on my three languages as I worked with other, more experienced translators and received their guidance and editing comments. It gave me a broader view of translation in business and legal contexts. At times I was even able to use all three of my languages in multi-language projects as a production team member, checking the page proofs of others’ reviewed English-to-foreign translations of operating manuals to check for uniformity, omissions or other irregularities.

Becoming a freelancer was a natural step beyond that valuable staff experience. Freelancing enabled me to build on it, and gave me independence in the form of the ability to choose my clients and projects, as well as set my own rates. Having a flexible schedule means you can fashion your personal life – appointments, vacations, etc. – as you need and see fit. If you want to work into the evening or on a weekend and the circumstances are amenable, you can do it, with no travel time or transportation expense involved. Over the years I have had the good fortune to be a part of many translation teams with colleagues whom I’ve come to admire and respect. I continue to learn from them on every project. In fact, I regard translation as a wonderful learning experience. And I hope that my own translations, in some small way, are helping others to reach their goals, whether they involve learning, information acquisition, communication, or commerce.

4. You work with Spanish, Portuguese and French. Is it just a coincidence or do you have a soft spot for Latin languages? How and why did they become your working languages?

I think I’ve mostly answered that question above! I certainly do have a soft spot for the Romance languages. Italian would be fun to study, too. I think I focused on Spanish in high school because I heard my older sister studying it, and my father still remembered a bit of it from his own high school days. Those initial sparks piqued my curiosity. I’ve long been a great lover of cinema, and it was through that avenue that my interest in French was awakened – Un homme et une femme, which, by the way, had a Brazilian connection. Later, my PhD program focused on Latin American studies, so of course Brazil and the Portuguese language came onto the menu as a natural extension of that interest.

5. Your areas of expertise are law, business and international development. I always think it is interesting to know how people specialized in their areas, because stories are always different. So how did you end up translating in those fields?

Those areas of concentration grew out of the potpourri of my previous experiences. Most of my work as a staff translator focused on business or legal documents, so those were areas in which I developed some familiarity and confidence. As a freelancer, I took some university law courses and, over the years, have had the pleasure of being a part of many different teams of translators working on major international legal cases, particularly involving environmental issues and patent litigation. In many instances, the teams included translators who specialized in the case-related technical fields, who could therefore provide expertise on subject-matter questions that arose. My experience with the consulting firm offered me an introduction to the major U.S.-based international development organizations, with which I was later able to connect as a freelance translator.

6. You have been a member of ATA for almost 30 years, and an active one, being the chair of its grader group for Portuguese to English certification exams. I think that speaks for itself regarding your opinion about the importance of associations, but it is never too much to emphasize it. Could you share your thoughts regarding the role associations play for the professional translator?

Translation, particularly as a freelancer, can be a rather solitary profession – a fact that anyone reading this interview no doubt already knows. As an analytical person, I’ve always been good at working on my own. But the only way to improve and really come alive as a translator is, in my opinion, to be part of a community of like-minded individuals. I’ve mentioned that I view translation as a learning experience. To be sure, I always find things to learn in the subject matter of my work, whichever field is represented. But there is much learning to be gained from editing or being edited by colleagues, and I have met most of them through ATA. And yes, even grading is a learning experience, in that it makes you focus on the meanings of words and how they are used. I’ve attended most of the ATA conferences over the past 30 years. They offer a wealth of educational sessions, a chance to investigate new topics, stay up-to-date on technological advances, meet new people, explore various cities, enjoy camaraderie, and build friendships. Those are invaluable experiences that enrich one’s life and form the building blocks of good translation.

7. Now it is your turn. I am quite curious to know whom you have in mind as the next honoree.

My nominee is Kim Olson, a long-time colleague with whom I have had the pleasure to work on many translation projects. I admire Kim for her finely-tuned translations, diligence, creativity, and professionalism. Most recently, she has been a model of good project stewardship, skillfully managing a team (of which I am a part) of several high-level translators who produce the English version of a major Brazilian scientific/technical research funding agency’s monthly publication. She presented a session about her experiences with this ongoing project at the most recent ATA conference. I am honored to count Kim as a valued and trusted colleague, and it is a joy to know and work with her.

Thank you, Doris, not only for accepting Naomi’s nomination and my invitation to be part of the interview series, but also for taking the time, during the busy holidays, to answer my questions. It was a pleasure e-meeting you and getting to know you a bit better.

Join 443 other subscribers
Follow Carol's Adventures in Translation on WordPress.com