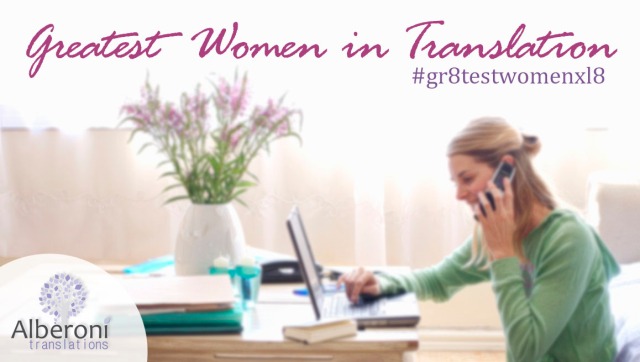 I’m alive! Tough times, huh? I hope you are all doing fine, at least considering our circumstances.

Bear with me while I try to get back on track with posts this month. But at least now I hope I manage to update the blog as I should. Stay tuned!

Meanwhile, please welcome our next Greatest Women in Translation interviewee, French poet and translator Michèle Métail, nominated by Jody Gladding back in March. 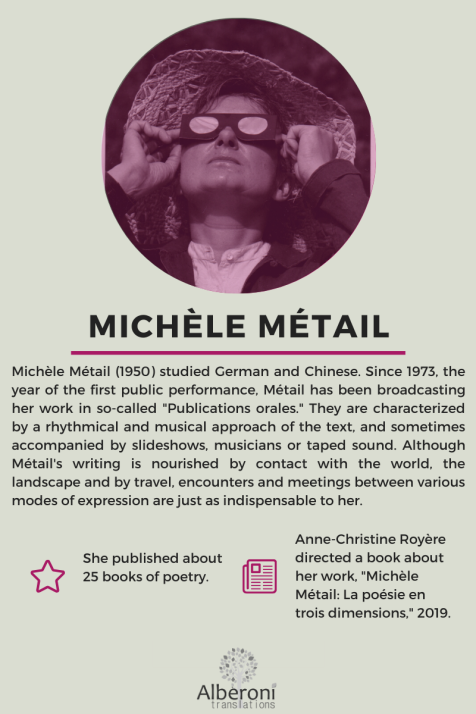 1. You were the first female member of Oulipo, “an extremely divergent group of writers, all of whom adhered to the same basic literary principle in that they observed self-imposed writing constraints,” as described by this Poetry International Archives article. Could you tell us a bit more about Oulipo?

The main purpose of Oulipo, as planned by its founders (Raymond Queneau and François Le Lionnais in 1960), was to create new writing rules (based on mathematics), that other writers could also use and let evolve. A historical example was the sonnet. After my cooptation in the group in 1975, I developed another kind of relationship between text and form, where form is also part of meaning, so that a new form appears only in one work and is never used a second time. This relationship between text and form was the reason why I left the group in 1998. However, I am always working with rules, constraints. Among the new rules promoted by Oulipo, several of them concern translation extending the concept to the homophonic or lipogram translation (see Georges Perec translating Rimbaud, for example), or the Multitranslation invented by Outranspo.

2. Together with Bernard Heidsieck, you founded Dixit, “a movement that sets out to merge the different artistic expressive forms rather than to emphasize the differences between them,” according to the same article above. Could you also tell us a bit more about Dixit?

Bernard Heidsieck was a French sound and visual poet who was connected to other poets of the same movement, all over the world, like John Giorno, Bob Cobbing, Haroldo da Campos, the Wiener Gruppe and so on, at a time festivals were organized in some countries but France was looking like a desert in the matter. So we founded this association and decided, in 1980, to organize a big festival, Poésie sonore internationale, in three towns: Le Havre, Rennes and Paris (Centre Pompidou). In collaboration with institutes we invited poets from several European countries: Germany, Austria, England, Italy, Sweden, Yugoslavia, as well as eight French poets. When we perform together, we question translation and the meaning of words, sometimes being possible to understand without speaking the language. This festival was successful but at the same time Jean-Jacques Lebel was stating the same fact and founded Polyphonix, a great nomad festival. After a long period without possibilities to promote this non-academic form of poetry, both associations were developing the same purpose. So we joined Lebel and Polyphonix, and broke up our association. Later in 1995 I founded, with composer Louis Roquin, another association: Les Arts contigus, a project to connect different artistic expressive forms. We organized great exhibitions with readings, concerts. The concept of contiguity emphasizes the borderline between two expressive forms, such as visual poetry = the text as an image, and visual scores for music = when the composer doesn’t write notes as usual but creates new signs to express new sonorities. We also invited artists from other countries. The question of creation in another language and translation was acute.

3. In some of your poems you use formats taken from other media, such as a series consisting of 10 lines with 15 letters each, derived from the standard measurements of photographs. Could you tell us a bit more about your poetry creation process?

I often work with photos. As I arrived in Berlin as a DAAD guest for one year, I began to take pictures of the town through reflections on windows. It was an unreal town, inversed, with broken lines that I saw. I wanted to write about my discovery, my experience in the town, and decided to write poetry in the form of my photo prints: 10 x 15 cm, that is, poems of 10 verses and 15 letters each. With these few letters, the syntax was also broken, like the reflections. It’s what I call photo format in the work Cadastre (in Toponyme: Berlin), grouped in a series of 24 photos and 36 poems (format of the negative). In another work about Japan, I used as text pattern the Genkô Yôshi, a scholar’s paper with 400 squares to fill. In this series, each text contains 400 letters. I’m always looking for measures related to my subject and, as I said, I only use them once.

4. How was translation introduced in your life?

I studied German for the first time at the university. I learned about contemporary poetry through the Wiener Gruppe, when I lived in Vienna (1972-73), but this kind of text is impossible to translate faithfully, because they work on several levels (sound, visual), not only meaning. Later, when I lived in Berlin (2000-2001), the literaturWERKSTATT (today Haus für Poesie) organized a meeting with French and German poets. My partner was Thomas Kling. He was also skeptical about poetry translation but it was indeed a fantastic experience. We both adopted one another’s work and re-built it in our own language. We found a real complicity, and our exchanges were intense. We had long discussions about the use of some words. At the end of the workshop there was a reading, it was a great moment. Thomas Kling found the same rhythm in his translation as in my poems. Other workshops followed, in Berlin and other places. It’s always an opportunity not only to know the work of other poets, but also to increase our own poetic world.

In several other projects I use patterns, constraints used by translators to create a version in their own language. For example, Marcella Durand translated my book about Marseille (a panorama of the town in 14 views), each view in 48 lines of 24 letters, without punctuation. Marcella transposed this constraint into English (The Earth’s Horizons, Black Square Editions). She explains she needed to create her own language, as I did. It’s not a translation word for word but keeping the spirit of the text, sometimes in other words. In the same way I worked with the German poet Ulrike Draesner on a translation in 5 syllables of a long poem about China. Working with the German language was particularly difficult because words are longer and syntax more complicated but the original poem has 2,870 verses, and she translated it in the same length. I’m also working with the Austrian poet Christian Steinbacher. I translated his text, and without speaking French he re-built some of my texts in German, for example, Portraits Robots (Phantome, Phantome, soon by Korrespondenzen). In all these cases the publication is bilingual. Both poems evolve in parallel. That’s my experience as a poet translator and a translated poet.

5. Could you tell us a bit more about your life as a translator?

I talked about translating from the German, but the most I do is from the Chinese, a few texts from contemporary poets and more from old Chinese. The starting point was Georges Perec’s death. After his funeral, I came back home and was so sad, I couldn’t do anything. Suddenly, I saw a book on my desk, that I had recently bought: Chinese Poetic Writing by François Cheng (available in English by Calligrams). I opened the book aimlessly and read a sentence about the possibility to write palindromes in Chinese. Georges Perec wrote the longest palindromic text in French. I interpreted this coincidence as a sign of my diseased friend and decided to study Chinese in order to learn more about this type of poetry, for myself. It was in 1983 and I was 33 years old. In 1994 I wrote a doctoral thesis about Chinese reversible poems with François Cheng. I never thought I could become a bookworm and write about a very old tradition. I was a poet and didn’t want to teach at the university, I was also too old, but I tried another way, a creative way, to pass on old Chinese texts. My translations are part of a larger project that focus on China today, that is, reading about the past and better understanding the present. For example, I travelled for three months throughout China (from East to West) on the same path as a Song dynasty poet (12th century), Lu You, who was the first to write a travel diary in China. I took it as a guide and went to the same places, collecting landscape poetry. The book (Voyage au pays de Shu) mix extracts of Lu You’s diary and mine. It’s the first part, Journal 1170 – 1998, but the book is reversible and the second part is an anthology of collected poems, 140 in total, illustrating all the 26 chapters of the diaries. The reader can read the diary and the anthology separately or move from one to the other. In 2011 I took another trip on the same path as a Tang dynasty poet, Wang Wei (8th century), a great landscape poet and painter. The book (Le paysage après Wang Wei) also consists of two parts: 20 views on current China with references to the past in places where Wang Wei had been and a new translation of his famous work Le recueil de la rivière Wang, that contains 20 poems on his own estate. This place was the goal of my trip and it was very instructive about modern China!

6. How was your experience of being translated by Jody Gladding, our previous interviewee, in Wild Geese Returning: Chinese Reversible Poems?

It was a great deal for Jody Gladding because she doesn’t speak Chinese and translated from the French, but she was fascinated by this masterpiece written by a woman in the middle of the 4th century. My translation from the Chinese was already particular because the diagram poem contains 841 characters that give over 3,000 poems. For a group of 36 characters inscribed in a square for example, you find 64 different ways to read a poem, and in a translation you need to write the 64 poems or some of them. They cannot be restricted to one square, like in Chinese. We must develop, unfold the original diagram. The translation cannot be a picture like the original but it has to be informative. We had a lot of exchanges about references that Su Hui recalled, about the meaning of some words in connection with the way of life of the time, of history. It was also for me a great opportunity to improve my translation. Translating is always a dynamic process, that’s why it is exciting.

The Italian translator Valentina Gosetti. She published, in collaboration with Andrea Bedeschi and Adriano Marchetti, an important anthology about French women poetry from Romanticism to modern times: Poeti di Francia e Oltre. Dal Romanticismo a oggi. I discovered a lot of poets I had never read.